In the latest of my series of snap videos shot in location at La Molina, here is nice way to use your snowboard to get your obliques and your quadriceps warmed up for Snowboarding.

Reverse woodchop is an exercise you have probably seen in the gym. There are many ways you can perform it using cables or weights (my favourite is using TRX). The rotation and lift builds a connection between your upper and lower body that is ideal for boarding or skiing, and it also strengthens the core.

If you want to know more about how Pilates can help your snowboarding or skiing then click on www.skicorestrength.com

www.chrishuntwellness.com
I created Pilates Carnival with one simple aim: to promote and assist with the training of Pilates teachers… all over the world. 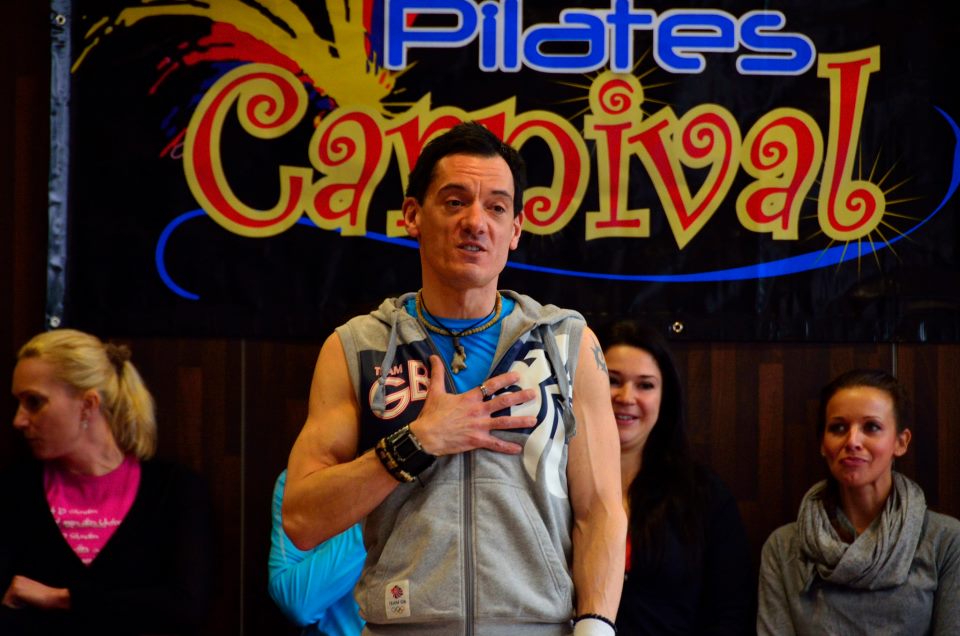 My passion
Pilates Carnival does this by providing free places to training courses, conventions and workshops, and by organising Pilates Carnival Conventions for teachers and experienced Pilates followers from all over the world no matter which school of Pilates they come from.

Pilates Carnival Conventions
The purpose of the conventions are to teach, learn, socialise, break down barriers. Share our passion and ideas. There is a full program of classes, workshops and seminars, and lots of socialising. The conventions are totally different to other conventions, with fresh new presenters, fresh new ideas, and working with a children’s charity as a partner, all profits are donated to the charity. Now that is a breath of fresh air? Pilates Carnival is not about egos, and there are no boundaries and no limits to what we can learn together.

Pilates Carnival Barcelona April 2014
The next convention  is in Barcelona on 25, 26 and 27 April 2014. The charity partner is Fundació Pere Tarrés. This is a wonderful organisation which is doing amazing work with children of all ages.
If you want to get involved you can join the Carnival community by clicking on our Facebook Page and learn whilst giving at the same time. Or please spread the word by sharing this post with as many people as you can. What better way to make a real difference to you and to others who really need our help?
Thank you.
www.facebook.com/chrishuntofficial

A quick rest in between runs yesterday at La Molina. Crazy warm day but a good day spent shredding the back country and try to annoy the skiers 🙂

Shot some snap videos for www.skicorestrength.com, how to prepare for boarding. Beautiful scenery up the mountains.

My Snap Video of a simply but effective stretch for you to try. I am a reasonable man. I am Buddhist and I meditate twice a day, so it takes a lot to get me annoyed. I am always tolerant and accepting of pretty much everything life has to throw at me. I do not go looking for trouble or problems, quite the opposite in fact as I have a positive attitude and this usually leads to a positive outcome.

But (you so knew that there was a “but” coming….) sometimes in life we have to make a stand when confronted with abysmal service, because if we do not, then nothing will ever change.

Seldom in the world of appalling customer service and terrible reputations is there one company that stands head and shoulder above the rest, whose very name is becoming synonymous with bad service. That company is (of course) Ryanair. They have taken terrible customer service to a whole new level. I used to think that BT were hopeless, but Ryanair trump anything BT can do for one reason. I think BT are hopeless because they are clueless, one hand does not know what the other hand is doing, whereas I suspect that Ryanair know exactly what they are doing when they treat customers like low-life.

We now use “I’m confused.com” in our everyday language to simply mean that we are confused about something. How long before we start to say “that’s a bit Ryanair” meaning that’s a bit crap?

So to my story which I will keep brief. It is by no means as bad as other stories, but it all began one cold November morning.  I had booked myself onto the Ryanair flight FR9811 on 29.11.13 due to leave Barcelona at 6.40 am. This meant I got up at 3 am and as the taxi company insisted on leaving a ridiculously large amount of time to get to the airport (they were expecting traffic at 4.00 am?) so I arrived at the airport about 2 hours before my flight was due to leave. When I arrived the boards were already saying the flight would be delayed until 12.15. At first I thought it was a mistake, but no, the new departure time was indeed 12.15. This raises the first interesting point, that Ryanair knew before 4.00 am that the flight would be late and that it would take them over 8 hours to get another aircraft to Barcelona…

Anyhow, I will skip over the next 8 hours spent at the airport except to say that airport seats are very hard and the 5€ that Ryanair provided to the passengers bought me a coffee and half a banana. The flight actually left Barcelona at 12.30 pm, nearly 6 hours late. When I asked the cabin crew what was the cause of the delay, they did not know.  The absolute cherry on the proverbial cake was when we landed six hours late, one of the cabin crew played the annoying Ryanair trumpet to announce “another on-time Ryanair flight”. Incredible incompetence.

This all begs the question, does anyone at Ryanair know what is going on? The answer to this question is clearly yes. There has to be people at the top who know exactly why they disregard their passengers, do the minimum they have to do to barely comply with regulations. This is why they have fallen so far behind EasyJet in recent years.

Anyway, back to my story, and this is the crux of my issue. When I finally got back to London, an email was waiting for me from Ryanair (so they can act quickly when it’s give people bad news) telling me I was not due any compensation because the delay was caused by “extraordinary circumstances”. I sent a letter to Ryanair to ask what exactly was the cause of the delay. They told me that there was a technical fault with the aircraft. I politely wrote back telling them that it was not enough to say “technical fault” as they well knew. See, for them to claim Extraordinary Circumstances the fault must be something that could not be picked up by routine maintenance. They of course know this but chose not to explain this to me, presumably because they have something to hide. So again I wrote to them asking them to tell me the exact reason for the delay. They replied by saying that they could not tell the exact cause of the fault because it was technical information and was therefore confidential.

To summarise, they were relying not paying compensation by saying that the fault on the aircraft was something outside of usual service, but they refuse to tell me what the fault was so I have no way of proving either way if what they are saying is true. Very clever.

This would be funny if they had not cost my several hours of my life which meant I that I missed important meetings and appointments that cost me a lot of inconvenience and money.

So the reason of this post is not just to vent my spleen. What I want to do is to ask everyone to share this blog because I want to find other passengers who were on the same flight so we can make a joint action against Ryanair. I also want all your horror stories about Ryanair. They think that can dump all over their customers and be free from punishment. The only way we can do something about their despicable attitude is to stand together. The power of the people can topple governments and dictatorships, so we can topple Ryanair as well. Do not be fooled by the recent announcements about improving the service. This is solely driven by the fact that their share prices are falling. It is another cynical commercial decision purely to con passengers to try to halt their slid into oblivion. What surprises me is that the same people who have overseen their fall from grace are still in their jobs. Many other companies would have sacked them months ago.

This is not a crusade. It is a genuine attempt by one voice to find other voices so that our joint voices are so loud that Ryanair have to do something. If they still choose not to, then there are media outlets who are willing to listen even if Ryanair are not.

Let’s stand together and show them just who they are dealing with.

Click here to see the first in my series of 15 second videos, the Pilates Tricep Push-up.

This is Level One, starting in all-fours neutral. It’s really important that the nose starts in line with finger-tips. On the in-breath we lower the nose towards the floor so there is a slight movements forward with the body. We return on the out-breath to the starting position. Muscle recruitment is as always vital, so  elbows must stay tucked to ensure we are engaging the tricep muscles. The movement is carried out as slowly as possible.

To make the exercise more difficult, we simply move the hands further away from the knees but still maintain the above rules; nose in line in finger tips to start and moving slightly forwards as we lower, elbows tucked into the sides of the body.

It may look and sound easy, but most people really struggle with this if it’s done correctly. It’s easy to cheat (elbows coming wide and body moving backwards during the move) but of course that just reduces the effectiveness of the exercise. 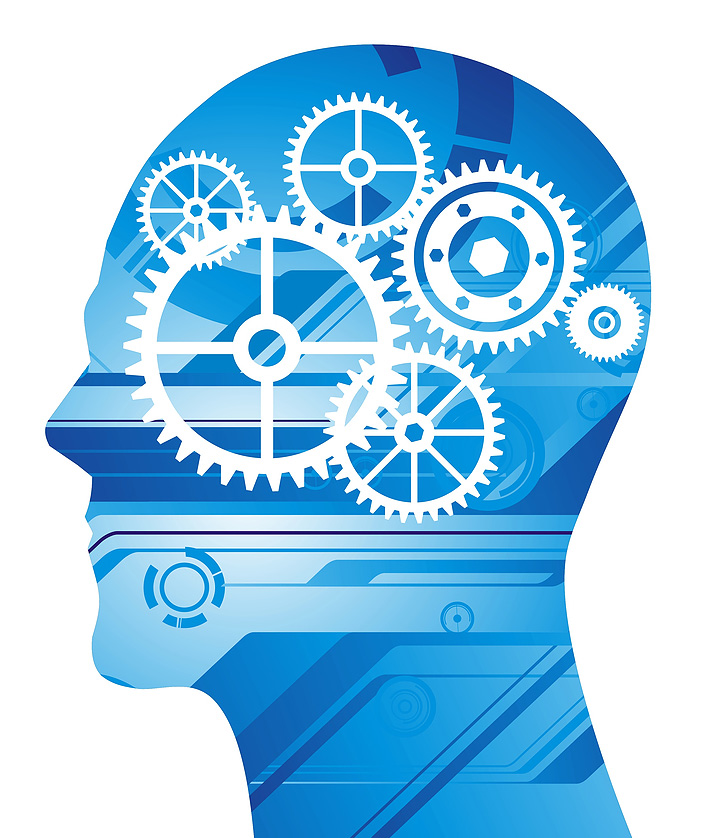 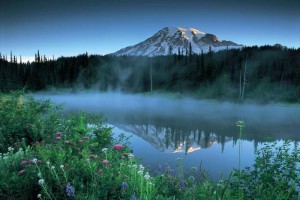