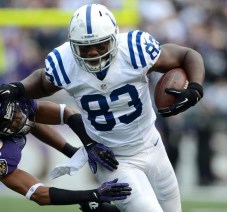 Pilates is for girls right?

Are there really still people out there that believe this? Apart from the fact that Joseph Pilates was a man and worked with men himself, and the fact that I am a man (oh yes), the old view in some quarters of Pilates being only for women was never correct and today is utter nonsense.

If you have any lingering doubts, then as Dwayne Allen. They don’t come more manly than Dwain. The tight end Colt’s player suffered a season-ending injury but he is now back to full fitness.

Colt’s General Manager Ryan Grigson indicated last month that he was optimistic that Dwayne would be ready to go in time for training camp this summer. For Allen, that’s even more time than he says he needs. He is doing pilates three days a week as part of his overall rehab schedule and says that he feels totally back after the October hip surgery that brought his season to a premature end.

I think it’s very important that stories such as Dwain’s get as much coverage as possible, because Pilates can be a wonderful system for men to use, whether they are rehabilitating from injury or if they are “fit” but want to get stronger, more flexible, and understand their body more.

So people, Pilates is for men. And if you still don’t believe me, I will give Dwain your number… 🙂