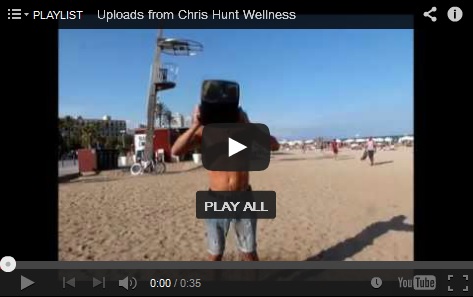 So this is the craze that is sweeping the world and has gone viral.

I was challenged so naturally I had to go ahead and tip a bucket of ice water on my head. To be honest, by the time the filming started the ice had melted but the water was still pretty damn cold on a hot August day in Barcelona!

I nominated my friends Robert Steinbacher, Jessica Exposito and Maria Bakhvalova so guys you have 24 hours…

Just so we don’t forget what this is all about, it a way to raise money and awareness for Amyotrophic lateral sclerosis (ALS), which is also referred to as motor neurone disorder (MND), Charcot disorder, and, in the United States, Lou Gehrig’s disease. It is a neurodegenerative disease with various causes. It is characterised by muscle spasticity, rapidly progressive weakness due to muscle atrophy, and difficulty in speaking, swallowing and breathing. ALS is the most common of the five motor neuron diseases. One of the famous victims of this disorder is Stephen Hawking.

As well as donating to the charity, I am also having a special Pilates session on the beach in Barcelona this Saturday 30<sup>th</sup> August where the cost is 20€ but all the money will be donated by me to the charity.

I hope to see you all on the beach in Barcelona for some charity Pilates! And keep the ice-bucket challenges going: Robert, Jessica and Maria, I am waiting!

Chris is an international Pilates presenter and educator based in Barcelona, Spain. He is the creator of <a href=”http://www.pilatesevo.com/”>Pilates EVO©, </a>bodyFUNC©, and CEO of Pilates Rehab Limited and Sport Core Strength.  He also organises Pilates Carnival and Fitness Carnival, conventions where all profits go to local children’s charities. For more information about Pilates with Chris in Barcelona, please click on <a href=”http://www.barcelonabienestar.com/”>Barcelona Bienestar</a>. To learn more about Chris, please read <a href=”http://www.chrishuntblog.com/about/” target=”_blank”>Just who is Chris Hunt anyway?</a> You can also subscribe by completing the form on the this BLOG to receive articles and special offers straight to your inbox.

Chris pays 50% of any money made from this BLOG to his charity partners, the other 50% covers the costs. More details can be found by clicking on www.chrishuntwellness.com and selecting the “charity partners” tab.